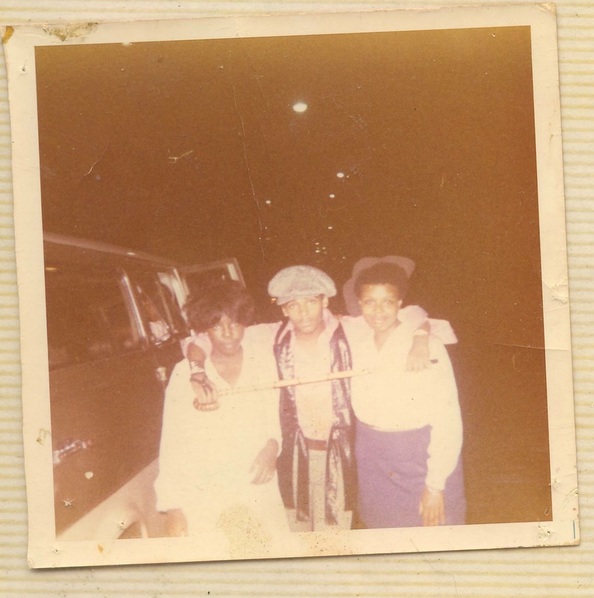 Antoinette, Dennis Burke from the Five Stairsteps and friend Ghita wearing the hat she gave Tito at the summer party in The Bronx, New York. Copyright, Antoinette Holmes.
From your first interview, you talked about some of the different memories you had with the group at your friend Crystal's house. What are some memories that stand out from your time spent with Michael and his brothers at her house?
One time, we gave a party for the Jackson Five and the Five Stairsteps at Crystal's house. We asked Crystal if we could have a party at her house for both groups and she said she had to check with her mother. Her mother said it was alright, so we threw a big party for the Stairsteps and the Jacksons because every time they would come to the Apollo, it would be when different schools were out. Back then, we used to get summer, Christmas and Easter vacations, and we used to get a midterm break as well. (I think we were out on break three or four times a year and that's when the Apollo Theater would bring in the different children acts).

This was before the Jackson Five were on Motown Records. We threw this particular party at Crystal's and I told Michael I was going to bring balloons. He said, 'Oh, ok,' and he thought I was just gonna decorate with them. Instead, we filled them with water in a bucket and brought them outside! We all had this big water balloon fight!

We started the water balloon fight and were just playing back and forth, trying to hit each other with them. Well, my friend said the bully of the block lived close by, and he happened to be passing by Crystal's house while we were playing. Michael went to throw and hit me, but his water balloon hit the bully instead! It was a big deal because this bully wanted to fight Michael! Right away, we ran back in the house and told Tito and Jermaine that this guy was out there, wanting to fight Michael. Tito came outside and that bully just looked at him! (Back then, Tito had this deep, low voice and Mr. Jackson used to tell us [Tito] sounded like O.C. Smith).

Tito looked at the bully and asked him, 'Is there a problem!?,' with this super deep voice of his! Tito was all puffed up, defending Michael. All the sudden, the bully just got scared and started saying, 'No, no! I don't want no trouble!' *Laughs*. We used to call him 'Tito the Enforcer' because all he had to do was speak and that guy backed down right away as soon as he heard Tito's voice! *Laughs*.

I've got pictures from that party with one of me standing next to Michael and Marlon, and my friend Keni with my hair all messed up from the [water] balloon fight! *Laughs*.

This party was before Motown. You know, this was when nobody knew who the Jacksons were unless they were coming to see their shows, like at the Apollo for instance. That bully didn't know who Michael was.

The following photographs were taken the summer of 1968 at a party for the Jackson Five and Five Stairsteps, and belong to Antoinette Holmes.

​(The following two photographs are copyright Antoinette Holmes and are for strict use on this website only). 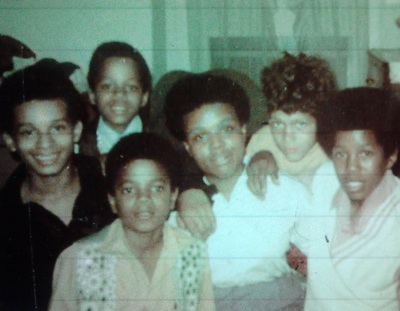 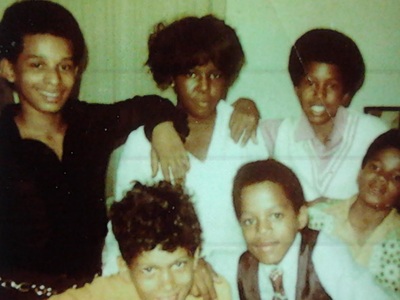 "Here are two photos of the Jackson Five / Five Stairsteps' Party at Crystal's house in The Bronx, New York in the summer of 1968 during the pre-Motown / Apollo Theater days. (Notice my hair standing on top of my head where Michael hit it with water balloons!)" - Antoinette Holmes

Left Photo: (L-R) - Keni Burke (Five Stairsteps), Marlon Jackson, Michael Jackson, Ghita (New York Jackson 5 Fan Club Treasurer), Crystal's brother David and Jermaine Jackson.
​
Right Photo: Back Row (L-R) - Keni Burke, Antoinette Holmes, Jermaine Jackson; Front Row (L-R) - David, Marlon Jackson, Michael Jackson
What are some things entertainment-related that you would do with the Jackson Five?
Crystal was always doing choreography and dancing. I remember how we used to dance with the Jackson Five and show them the different dance moves people were doing in New York, and they showed us different dances people were doing in Gary, Ind. *Laughs*. This was 1967 and 1968 at the time. We used to all dance to the Stairsteps' songs together. We definitely danced to their songs! I remember us all trying to do choreography and mimic what we saw them doing on stage.

Oh - we also had a pajama party with the Jackson Five at Crystal's house, too! Her grandmother Coco chaperoned us all. There was a bunch of us girls in one room and the guys were all in another room, but we didn't hardly sleep anyways! We were all up making jokes and cracking up, just making wise cracks and playing different pranks. It was the Jackson Five in one room, on one floor and us girls in another room, on another floor. We had so much fun.


​What are some special memories you have of watching the Jackson Five from the audience?
When I started the New York Jackson Five Fan Club in 1967, we had all gotten really close we each other. I made sure everyone under the Jackson Five Fan Club got to meet them and see them perform. Whenever they were in town, Michael would call me and ask, 'Y'all comin' to the show?' I'd say, 'Yeah, we're coming to the show.' [At first], Michael asked me, 'How will I know if y'all are in the audience?' I said, 'You'll know if I'm in the audience because I'll yell.' I used to like James Brown a lot, so I told him I would yell like this: 'Yeeeeow!' Michael said, 'Okay! Imma' do it too!' So I said, 'Okay yeah, you do it back to let me know you heard me!' He said, 'I'm also gonna put my hand up in the air and spin!' So he started yelling 'yeeeow!,' put his hand up in the air and would spin around when he heard us. That was our signal to each other. I got that from James Brown and Michael would borrow that for their shows. 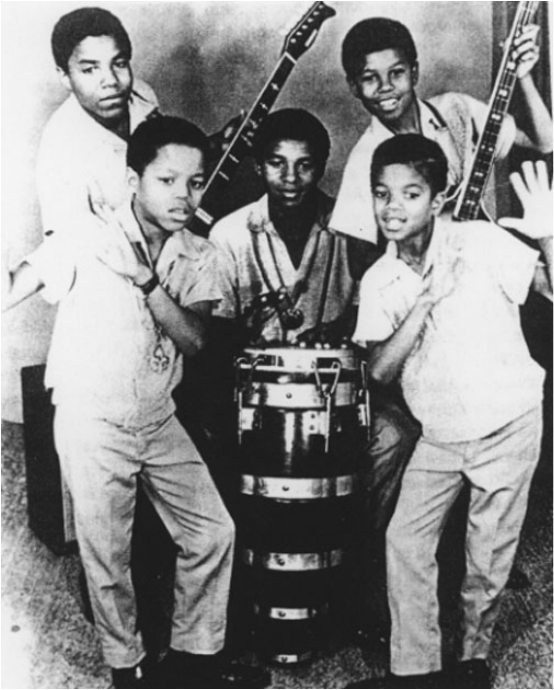 The Jackson Five in the late 1960's.
I know you laugh about a lot of your memories spent with Michael before the Jackson Five joined Motown Records. What is one unique memory that stands out to you, that is telling of his fun personality during that time?
Back then, Coney Island was famous in New York for many years. When I was young, my father and aunt used to take [my sister and I] out there, and there was a ride called Steeple Chase where you had to walk through a barrel, and the barrel would spin. (Your dress would fly up easily at certain times if you weren't careful because they had air that would blow up through it at different times!) Then they had a ride where you would go down these big slides, and what looked like record players spinning around.

I used to tell Michael about all of the different rides there and he would sit down in fascination like I was telling him campfire stories. *Laughs*. He would ask me over and over, 'Tell me about Corny Island! Tell me!' He used to call Coney Island 'Corny Island'! He'd look at Mr. Jackson and say, 'Joseph, can she take us to Corny Island!?' Joseph asked me, 'How far is it?' I told him it was far away and would be a long trip on the train there and back, and that we wouldn't be able to make it back in time for their next show with how their breaks ran at the Apollo.

Michael loved those stories though and he wanted to hear about Coney Island over and over. He would always say, 'Tell me about Corny Island!'
I know in our first interview, you talked about some of the different games you would all play as kids. Do any other games stand out?
We used to all play truth or dare. Like, we'd dare each other to do something, but if the person didn't do it, we had to make up a punishment. Sometimes it would be a punch on the arm from everybody in the room. Or, you had to drink a quarter of a teaspoon of vinegar. Sometimes we would make the person drink eight glasses of water at one time! We would say things like, 'I dare you to go over and lick that pole!' So if you didn't do it, you got punched in the arm. *Laughs*, Or whatever the consequence was. Sometimes, we would make the person eat a little packet of salt if they didn't do the dare. You know, we were kids so we were all just trying to think of things to do.

We would say, 'We dare you to go over there to that girl and go 'Ooh! Ooh! Ooh! I don't like your dress!' Or something silly like, 'Ooh, you're nice!'  We would just make up stuff as we would go along.