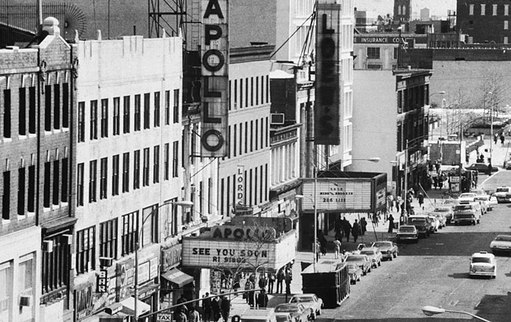 Photo from the 1960's. (Copyright, unknown).
While growing up, you were surrounded by music and able to enjoy the Apollo Theater in a unique way. What's your story?
My dad was a musician that played the organ and he had a musical group that was a quartet that used to have rehearsals in our living room. Back then, we lived in the Projects in Manhattan. In the Projects was a man named Bell and he had a daughter named Peggy. Peggy was my age, around 13 or 14 years old at the time, and we used to play with each other, and back then, Bell would come to our apartment to listen to my father's rehearsals. All of the instruments would be set up in our living room for rehearsal and my father had a big organ that had bass keys on the bottom, and he used to have jam sessions.

One night when Mr. Bell was over at our apartment, my father told him that I played the organ also and they asked me to play something. So, I played for them and after I had finished, Mr. Bell said, 'Oh, good! Good!' He then asked me if I wanted to be a musician and I said 'Yes,' and with being a kid, I thought I wanted to at the time. Mr. Bell said to me, 'If you ever want to come to the Apollo [Theater], come around to the backstage entrance. I'm head of security there. You ask for me. Just ask for Uncle Bell and you can come in the backstage entrance and meet anybody at the Apollo at any time.' I said, 'Great!', and that's how I started hanging out around the Apollo.
​ 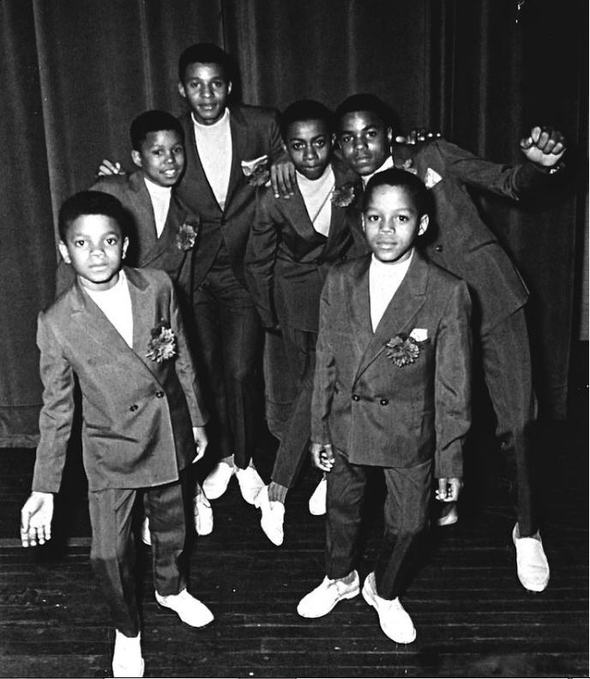 The Jackson Five and Johnny Jackson at the Apollo Theater. (Copyright, unknown).
After you started going to the Apollo Theater, you got to know the Jackson Five and become close friends with them. How did your friendship come about, particularly with Michael?
My friend and I heard about a group that was doing Amateur Night at the Apollo called the Jackson Five, so we went backstage to find Mr. Bell and wanted to meet them. We went backstage and they had already won the contest. (I believe they stayed at the Apollo after they won Amateur Night. I'm pretty sure they did. The group had such an incredible standing ovation and so much cheering from the crowd when they won. *Thinking*... The Apollo either kept them on or called them back). Anyways, at some point, I went backstage and saw them. At the Apollo, the headliner would stay on the second floor and you would go up one flight of steps, and the newcomer artist or group would stay on the very top floor. I think there were maybe five flights of steps. Well, the Jackson Five were at the top, and my friends and I walked all the way up there to meet them. Mr. Bell told us, 'Knock on their door first because they may not be dressed.' We knocked on the door to meet them and found a place to sit down. I remember that their [dressing] room had large mirrors for making sure everything looked right for their performance and different chairs.

We came in to meet them and I remember Michael was sitting on the window ledge, but wouldn't say anything! I introduced myself to everybody in the room, and while doing so, Michael said 'Hello,' but that was it. He just sat there with his elbows on his knees, resting his chin in his fists, and just stared at me! Finally, I started feeling uncomfortable after a while and was thinking maybe my nose was running or something was on me. I kept wiping my face, looking to see if maybe it was dandruff he was staring at. I didn't know! I just kept wondering 'Why is he just looking at me?'

All the sudden, I saw this big cockroach, and it was massive. It could of had its own zip code! *Laughs*... I thought, 'Oh my goodness!', and with being a kid, my mother taught me better, but after seeing that bug, I blurted out a curse word. I said, 'Oh, shit!' I didn't mean to, and I caught myself right away. I put my hands over my mouth and started saying, 'I'm sorry! I'm sorry! I didn't mean to, but I'm scared of them!' Right away, I got up and started moving, and Michael just busted out laughing! And I mean he wouldn't stop laughing​! I said to him, 'You think that's funny? That's not funny!' He said, 'Yes it is! It is funny!' After that, Michael was under me everywhere I went. Everywhere I went when we were together, he was there. After that, me and Michael became thick as thieves.


​Who were some of your friends at that time that would go with you to the Apollo Theater?
I always had a clique of girls with me, which was Ghita, Mildred, Marilynn, Rebecca, Jackie G., Ernestine, Marie, Sharon, Gloria, Joyce and Crystal. Crystal was good friends with Gheeta, but we got to know each other because I eventually had the first official Jackson Five Fan Club and was the President. Crystal was already Vice President of the Five Stairsteps Fan Club, who was also playing at the Apollo at the time. Crystal made sure that we met the Five Stairsteps and became friends with them as well.

During that time, we used to go to Crystal's house a lot because she had a big, private house. I remember it having different floors and a lot of the rooms were unoccupied. Her grandmother Coco and her mother Anne lived there at the house as well, and would supervise our parties to make sure we weren't getting crazy. *laughs*... We had a lot of fun at her house.

Back then, we knew the Jackson Five and so did Crystal, so we all had a lot of fun together.

(We also had some guy friends with us as well - Cedric and Reggie). 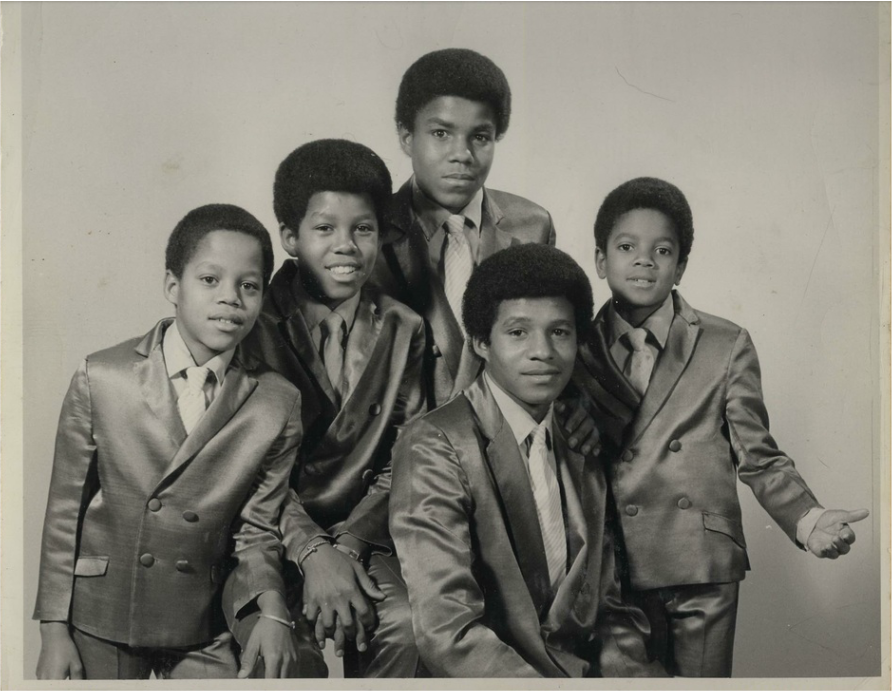 My sister came around to meet the Jackson Five a couple of times and she asked Mr. Joe [Jackson] if she could take Michael and Marlon to the store to get some candy. He said 'Yes,' so she took them to the candy store on the corner around 126th Street. My sister bought them candy, and I'm telling you, Michael really liked my sister, Jackie. We have Native American in us and my sister always had such beautiful long hair, and Michael had a big crush on her. My sister was eight years older than him, but he just had the biggest crush on her! *Laughs* So we just all became friends and started hanging out.


What are some fun, little conversations you had with each other that stand out?
My friends and I really took to them a lot because the Jacksons' were just good people. I remember asking them their middle names, what their sign was and when they were born. I remember Tito telling me he was born in October, 1953 and I told them I was born September, 1953. Michael and I were both Virgos because his birthday was August 29 and mine is in September. You know, we were just kids having fun.

*Laughs*... We also used to tease each other about our middle names! I remember telling them, 'My real name is Priscilla' and they used to call me 'Priscilla the Gorilla'! I told them I go by Antoinette and that's what my family calls me. Michael said, 'My middle name is Joseph, like my father.' Tito said his middle name was Adaryll, Jermaine said his was La Juane and Marlon said his was David. Then Jackie said 'My real name is Sigmund,' so we started calling him 'Sigmund the Sea Monster'! *Laughs* 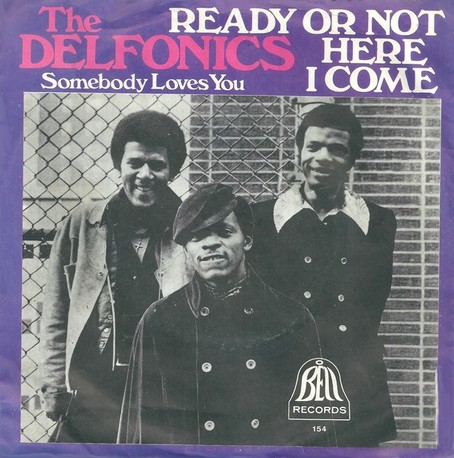 Single by the Delfonics, released Oct. 22, 1968.
Do you have a special music-related memory that stands out with the Jackson Five?
Mr. Jackson had a man with him named Mr. Jacks. He also had Ronnie Rancifer and Johnny Jackson. This one time when we were all backstage at the Apollo, the organ was out, so I asked if I could turn it on. I remember this was during some down-time and it was like 2 or 3 hours between shows. (Since Mr. Jackson wasn't too familiar with the area at that time, he wouldn't let his sons venture out that much). So, I asked Ronnie 'Can I turn the organ on?' He said 'Yeah, go ahead.' He went ahead and turned it on for me, and I started playing 'Ready Or Not Here I Come (Can't Hide From Love)' by The Delfonics. When I started playing it, the Jackson Five joined in! So, here comes Tito with his guitar and Jermaine with his bass, but [his bass] wasn't plugged in, so I could easily hear them singing too. They all joined in playing and singing with me, and we were backstage in their dressing room.

(The Jackson Five first met The Delfonics and got to know them well while on the Chitlin Circuit).

While we were all singing 'Ready Or Not,' Mr. Jackson heard me playing the organ, and when we finished he told me, 'You know something? I'm going to talk to Pops Staple of The Staple Singers. They've got a girl group called The Emotions and they need someone who can play the organ, and I'm gonna put you in. I'm gonna make sure you get that! Would you like to do that?' I said, 'Yes,' at the time and was excited about it, but kind of worried because I would always ask Michael about his different friends [in Gary, Ind.], and he would tell me that he didn't have too many and that he missed [his] home a lot. I was so appreciative of Mr. Jackson, but just had those nervous thoughts. You know back then, they didn't know how to play the games that we used to play. I remember saying, 'You guys don't know how to play Truth or Dare!?' It was little things like that, that kept making me nervous about getting into a group.


Since the Jackson Five traveled a lot, even before joining Motown Records, how did you keep your friendship going?
Any time the Jackson Five were in town, they would always invite my friends and I to come see them. We became fast friends, exchanged and phone numbers, and everything. You know, we were truly very close friends, and my friends and I would get phone calls from them like crazy. My friend would call me and ask, 'Did Michael call you?' I would say, 'Yeah, he called me. He call you?' Michael would invite us to come down to the different hotels they were at, whenever they were in town. We would get these calls for years from 1967 to, I think, 1972. It was normally Jermaine or Michael who would call me on the phone, and they would write me tons of letters. I still have letters from them from each new address they lived at. One was 2300 Jackson St., in Gary, Ind., another was a 1601 address on Queens, and the other was from their Havenhurst home. So I had their different phone numbers and we would call each other all the time, back and forth.

After they got to Motown, they would tell me what hotel they were going to be in, what time to come to the hotel, what time they were going to get there, and ask us 'Who you gonna bring!?' *Laughs*... We always had such a good time. ​
​
Throwback Thursday    Flashback Friday    Leave Feedback!    The MJ Reel Calendar