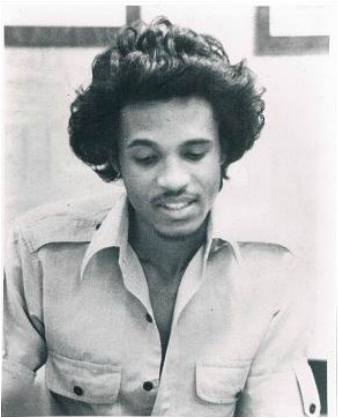 Clay Drayton
How did you get involved with the Jackson 5 musically?
I first got involved with Motown producer, Hal Davis. I was sitting in the Motown lobby on 5th floor as a new songwriter, waiting for something to happen. The producers would walk into the lobby one after another, and I remember hoping that someone would ask me for a song. Day after day, I would sit there and watch the different producers walk in through this mysterious door, and each time it opened, you could hear this angelic music on the other side. I remember how I really wanted to go in through that door. I remember thinking, 'I have to go through that door,' but Michael-Anne at the front desk had it locked down

One day, I got lucky. I was sitting on the lobby couch with my guitar by my side, looking over a song that I had just completed and Hal walked in. He stopped, looked around the room and then walked over to me. Hal said to me, ‘Hey man, what’s your name?’ I told him, ‘Clay.’ Hal asked me, ‘You got any hits?’ I said, ‘Yeah.’ He then said, ‘Follow me.’ I jumped up, grabbed my guitar and music bag, and followed him through that mysterious door. ​

Hal and I walked down the ‘Hall of Fame.’ We walked past Stevie Wonder’s office where he was working on music, Norman Whitfield’s office where you could hear something from the Temptations playing and more. Hal and I just kept walking and I knew it was like music Heaven.

I then followed Hal into his office and he closed the door. I remember looking around his office in the sunlit room where the walls were lined with Gold records. I remember how certain records in particular caught my eyes by the Jackson 5.

So at that point, we’re in Hal’s office and he said, ‘Let me hear what you got.’ So, I pulled out my guitar, and began to play and sing. After around one minute in, Hal stopped me and said ‘Wow, that’s good. I like the way you write. What else you got?’ He was focused on music for the Jackson 5.

It was 1974 and Hal was looking for a new single for the J5. At that point, they had already released their song ‘Dancing Machine’ and worked on 'Whatever You Got, I Want,' [and needed another song for the upcoming album, Dancing Machine.]

During that time, my writing partner Judy Cheeks was listening to my songs on the reel-to-reel and she came across my song ‘The Life of the Party.’ I remember her saying to me, ‘Clay, did you play ‘The Life of the Party’ for Hal? I think it would be great for the Jackson 5.’ So, I called Hal and told him, ‘I’ve got a song for you,’ and he had me come to his office. I remember walking to his office, which was only 3 blocks away from my apartment in Hollywood, played my guitar and begin to sing the lyrics, ‘She’s the Life of the Party!’ After just hearing the hook, Hal shouted, ‘That’s a hit!’​


What was it like recording 'The Life of the Party' with the Jackson 5?
I got a call one day to meet the group in the studio. I remember Hal and I riding there together and just being so excited to meet the Jackson 5 for the first time.

When we walked in, we turned left toward the Motown Sunset Studio. (To the right, was Sunrise Studio).  Sunset Studio was very large and could hold a full orchestra, and had a 10-foot Grand Piano. Our studio time was set at 2 p.m. I remember how Hal started playing the track of the song that was recorded with live musicians and a demo vocalist.

James Carmichael was also in the studio. He was the vocal arranger and the recording engineer. I remember how Carr, as we called him, was going over the final touches with Hal for the vocal harmonies. About 30 minutes later, the elder Jackson boys arrived. When they walked in, we had to have the track ready to go. ‘The Life of the Party’ had to be in Michael’s key as well as Jermaine’s if it was going to have double parts. I remember how we had to have the song lyric sheets written up, and the ad-libs had to be written out and ready to go.


What else stands out about that particular recording session?
I remember a lot of little things about that day. Jermaine drove up to the studio in his Carrera sports car, Tito was wearing his jean apple hat, and they were all talking and laughing together. A few minutes later, Michael arrived with Rose Fine, his school tutor. Michael was a minor at the time and had to have her there to make sure he had his studies finished. She also made sure that the producers were following the child labor laws. Under California state law, we only had three hours with Michael to get everything recorded and set. 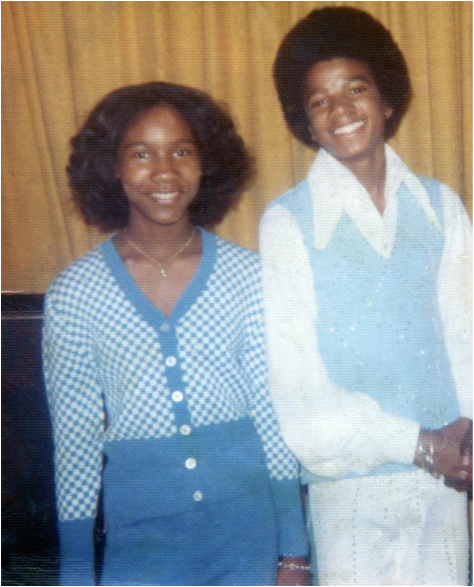 Tami DuCre' photographed with Michael Jackson in Chicago after a Jackson 5 concert. Tami, Clay Drayton's wife, knew the Jackson 5 through her mother who was a Motown employee.
'That day, Michael was quiet. He came in and sat in the control room next to Rose to do school work while waiting to work on parts of the song.

After we were set, Hal said to the guys, ‘Fellas, this is Clay. He wrote the song you’re doing today.’ The guys said, ‘Hey, how you doin’?’ That day was the first time they had ever heard 'The Life of the Party.'

The first thing we did were the background vocals. Carr went over the background vocals with them and got them down on tape. Then, we did the solo vocals. We recorded Jermaine’s solo first. Then, Michael’s solo. Michael went into the sound booth and I had to teach him how to sing the song. At that point, the engineer played the track and said, ‘Here we go.’ Then, the background started to play and the engineer pointed to Michael. But, when it was Michael’s time to sing as the engineer pointed to him, he was silent. It was as if he was unsure of what notes to sing and the phrasing for the melody. He didn’t say anything and let the track pass him by, and asked, ‘How did that go, again?’ I remember him doing that because he never wanted to sound bad or make a mistake on a recording. But, he was quick at studying and willing to go over the song as many times as necessary to make sure it was right. Hal really appreciated me being there to work with Michael on the song. ​


The group was serious about music, but what were they like in the studio when they weren't recording?
These guys were jokesters. The same day we recorded ‘The Life of the Party,’ they noticed that someone working on the song had a lisp. (Who was also a good friend and had fun with them). He couldn’t pronounce his ‘S’.’ He would say words with a 'Th' sound to them. I remember how one of the fellas said, ‘Hey, say pork sausage.’ The guy said, ‘What?’ One of the J5 said, ‘Say pork sausage.’ Very reluctantly, the guy said, 'Pork thaw-thage.' Michael and the guys fell out laughing. I did too! ​This was all in good fun and the guy knew it.

[In time], Rose Fine pulled the plug on the work and fun when the three hours were up, and she whisked Michael out of the studio.
All images owned by Clay and Tami Drayton.
​
Powered by